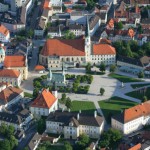 Alert system supported by mobile map orientation Altötting, a well-known destination for pilgrims in Bavaria, and Neuötting in its neighbourhood have almost become one town by now. The drinking-water supply of local inhabitants and guests is provided independently in both towns. To save costs the towns have recently set up a common alert system.

Each company that operates the local drinking-water supply system runs a duty system that is available day and night every day to be able to help and give a quick response to any failure of the water pipe network.Bearing the viewpoints of cost efficient operation in mind, the duty systems of the two towns have been amalgamated. This, however, has led to employees’ having difficulties in finding directions and pipes in the ’new’ quarters.It has thus become indispensable for workers on duty to have an access to basic figures of the pipes in both towns. Both towns had already had GIS software to keep a record of the details of their pipeline systems. Accessing the software available on the PC however was often rather difficult. In addition, both towns handled only their own GIS data, but not the other’s. This situation was generally solved by printing out the maps so that they could be used by workers on duty on paper. Leaders of both towns had to realize that it was not worth taking the ’analogue way’.Mr. Alois Wieser, who is in charge of the drinking water supply of Altötting, explains his experience with DigiTerra Explorer as follows:
’First I was a bit sceptical about how my colleagues would be able to switch from ordinary paper maps they were familiar with to new digital data management. Their experience however proved convincing very soon and PDAs with DigiTerra Explorer software running on them have become an indispensable element of the equipment of our employees on duty by now. Simple measuring and accessing descriptive data are easily real asset.’ 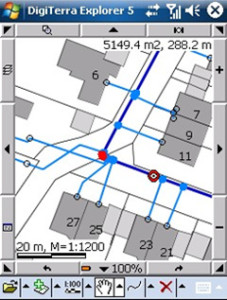 As digitalized GIS data for water pipes were already available it would have been illogical to return to paper maps and hand them out to employees. Thus a robust and compact PDA with a GPS receiver was purchased that was capable of handling maps and data with the mobile GIS software it run. The hardware that was selected was a Trimble Juno SB device whose durability in use was further enhanced by an Otterbox protective holster. From among the range of GIS applications DigiTerra’s Explorer 5 was purchased since besides its being easy to handle it is also able to display large amount of data fast and without faults.Transferring data from the GIS databases of towns to the mobile application of DigiTerra Explorer was simple to solve as the software supports a wide range of standard files. The selected format to transfer data was ESRI Shape.
’To improve transparency layers to be displayed at certain scales were set in DigiTerra Explorer. Valves for example can only be seen when segments of maps are properly magnified. Use was further simplified by setting up a users’ menu where functions needed to study maps are activated only. ’

Analogue maps in Altötting and Neutötting were relegated to the past. Thanks to the robust PDA and its high performance software any data required are available. Daily work has been significantly facilitated by identifying water pipes belonging to individual buildings by the GPS device at ease and by being able to collect data on the spot easily.
’This development has made it possible for us to have an access to water pipe plans and all their descriptive data on the spot for the first time. Users can orientate remarkably easily on the maps while working because the software automatically adjusts the map to the centre of the screen on the basis of the GPS position taken.’
Read more in PDF
loading...
© 1996 - 2018 | DigiTerra Ltd. All Rights Reserved.
Back to Top